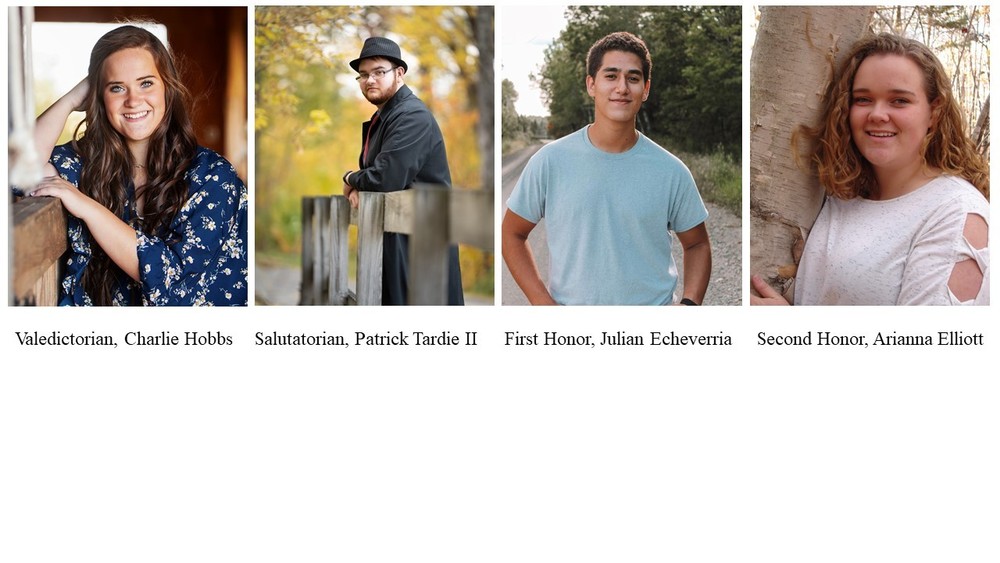 Hobbs is the daughter of Craig and Crystal Hobbs.  During her junior year, she was Vice-President of Washburn’s chapter of the National Honor Society then elected to President her senior year.  Charlie has been an outgoing member of the school community, participating in the soccer and softball teams as well as managing XC, basketball, and track.  She served as president of her class freshman thru junior years as well as volunteered in the community and her church.  Charlie has been on the highest honor roll every quarter as well as earned several highest achievement awards in her classes.  She has completed an astounding 41 college credits prior to graduation and maintained a 4.0 GPA.  In her junior year, Charlie received the Phi Beta Kappa award recognizing intellectual curiosity and achievement.  Charlie will be attending the University of Maine at Presque Isle majoring in Business Administration with a concentration in Accounting.

Tardie is the son of Paul and Yvonne Tardie.  He has been an active member in the school’s band and chorus programs being selected to participate in the All-Aroostook music festivals multiple times. Patrick is also a member of the recently reinstated Future Farmers of America program at Washburn as well as a member of the National Honor Society.  This year, Patrick received the Principal’s Award through the Maine Principal’s Association.  Throughout his career in Washburn, Patrick has received numerous highest achievement awards, maintained the highest honor roll every quarter, and worked in the after-school program and the Elementary School.  Patrick has had an active role in community service volunteering in his church and also a member of Boy Scout Troop 177, serving most recently as Junior Assistant Scoutmaster.  Patrick will be attending Maine Maritime Academy majoring in Marine Biology.

Echeverria is the son of Trina Farley and Mitchell Knight.  Julian is a member of the baseball team as well as cross country, and track.  He has also been an active member of the Varsity and Woodworking Clubs.  Julian has achieved highest honors throughout his high school career.  During his senior year, he has taken advantage of early college classes which included completing the EMT-Basic Course through NMCC.  He has plans of becoming a firefighter and is currently a Junior firefighter for the town of Washburn.  Julian will be attending Southern Maine Community College in the fall.

Elliott is the daughter of James and Hannah Elliott.  She is an active member of the school’s Civil Rights Club as well as Future Farmers of America and the Gifted and Talented Visual Arts program.  She is also a participant in UMPI’s Upward Bound Program.  Not only has she held down a job, but Arianna has also found time to participate on the school’s softball team and has maintained the highest honor roll status throughout her school career.  She was most recently awarded the highest achievement in her art classes.  Arianna intends to attend the University of Maine at Presque Isle.